Module 1:1 Starting With Why

You love to write, but you’re not as successful as you want to be.
You’ve written plenty of articles, stories, blog posts, but no one seems to care.
No one’s reading. No one’s buying. No one’s listening.
How come?
Obviously, you enjoy writing. Putting words on paper and seeing ideas become tangible gives you a little thrill in the deepest parts of your heart.
But the lack of interest kills you. Every time you send an article out to gatekeepers, or publish your thoughts on your blog, you wait eagerly to see if the view count increases.
When it doesn’t, you feel crushed. Devastated. You ask yourself:

“What am I doing wrong? Is writing really for me, after all? Will I ever be a successful writer?”

There’s nothing wrong with asking questions, of course. That’s normal.

The ONE Question Every Successful Writer Needs an Answer to

It’s time to face the truth: Writing is hard work.

But that’s not necessarily a bad thing…at least, not if you’re doing it for the right reasons.

And that’s where the ONE question comes in.

Every writer needs to start with the same question if they want to go far and be successful. Here it is:

WHY do you write?

Why DO most writers write?

To make money? To be heard? To feel significant? To share important information?

These are all legitimate reasons for writing…but not all of these reasons are created equal.

Some of the reasons listed above won’t take you far from the starting line.

Some won’t get you through the inevitable hard times.

Some aren’t strong enough to lay the foundation for a rich and rewarding writing life.

Of course, all of us writers have some desires in common — we’d all like our writing to be noticed, and maybe even make some money while we’re at it.

But those are mere surface reasons. They aren’t part of the deepest motivations that can keep us pushing through dry spells and challenges, they aren’t our biggest WHY.

Writers need to know their WHY for 3 crucial reasons:

But how do these three things apply to you?

And how do you uncover YOUR powerful motivator?

We’ll take a look at each reason in its turn throughout the rest of this article, and end with 3 practical exercises you can use, right now, to uncover your own powerful WHY.

“Success, like happiness, cannot be pursued; it must ensue, and it only does so as the unintended side effect of one’s personal dedication to a cause greater than oneself” — Viktor Frankl

The writer of the quote above was a Holocaust victim — a Jewish psychologist and writer whose life work was snatched from him, whose parents and wife were murdered by the Nazis, and who suffered for 3 years in sadistic concentration camps, including the notorious Auschwitz.

Frankl survived the horrors of the Holocaust in part because of his unshakeable dedication to his Great Work. When he was first arrested, the Nazi officers confiscated the book manuscript he was working on — his life’s work — and Frankl swore that he would survive the camps so that he could rewrite the book.

You could say, in a sense, that Frankl survived unspeakable horrors because he had a book to write. Literally!

And he’s not the only one.

Going deaf is a horrible experience for anyone, but for a musician who makes his living writing music?

In fact, Beethoven did consider suicide. But he didn’t go through with it.

Because Beethoven had a vision. He knew that he was writing music for future generations and believed that he still had great music to contribute to the world.

If a Holocaust survivor and deaf composer’s true stories haven’t yet shown you the immense power a meaningful WHY can lend you to overcome just about any obstacle, then I don’t know what will.

But having a deep, meaningful reason for writing isn’t just good for getting you through the tough times.

Reason #2: Knowing Your WHY Attracts (the Right) Readers

You want to attract readers who will become loyal fans. People who will benefit from what you write and tell their friends about you . You don’t want bored, uncommitted readers who skim your headline and then click away.

Knowing and working from your deepest WHY will not only bring in more readers, but also bring in the kind of readers you are looking for.

But how does it do that?

Writers are leaders, and leaders, according to Sinek, “need two things: a vision of the world that does not exist and the ability to communicate it.”

A vision of the world is also known as a “worldview,” and all of us have one, whether or not we know how to articulate it.

Good writers know how to articulate their worldview.

People are drawn to people who are good at communicating what they believe. Good communicators are inspiring, and make us feel like we belong. We want to help them.

In other words: The clearer you are with your message, the more likely you are to draw true fans.

Being a writer is your opportunity to shed light in your corner of the world, to clarify your own worldview, and to communicate your message in a way that draws people to you.

"People don’t buy WHAT you do, they buy WHY you do it." — Simon Sinek

When your WHY aligns with your readers’ WHY, they will trust you and want to follow you.

As you continue to broadcast your deepest, most powerful message, you will build strong relationships on unwavering values and beliefs — the only foundation for a truly impactful writing career.

But getting through dry spells and attracting loyal followers is not the only reason why you need to clarify and hold fast to your WHY.

There’s a third, and arguably, MOST IMPORTANT reason for clarifying your motivations before you ever put pen to paper:

Reason #3. Knowing Your WHY Allows You to Produce Something of Real Value

“Good writing is about telling the truth.” — Anne Lamott

If you wanted to, you COULD spend your entire writing life ghostwriting for sleazy marketers who push readers to buy things they don’t need.

There are plenty of people who have made lots of money, even entire careers, doing just that.

But what’s the point of doing that? If that’s all you plan to do with your writing skills and talents, you might as well not be a writer.

Being a true writer involves producing things — articles, stories, books, etc. — of real value. By which I mean, words that make people’s lives better in some way. What way that is, of course, depends on you. But remember this:

Writers can change assumptions and perceptions with well-written words, so it’s extremely important that you speak and write truthfully and constructively.

As a writer, it’s your mission to figure out the particular aspect of the truth that YOU are in charge of revealing to your readers so that they can behave and live in a way that benefits them and those around them.

What Maslow Got Wrong: The Main Gift Your Readers NEED

Psychologist Abraham Maslow is known for creating the “heirarchy of needs,” usually expressed in a colorful pyramid that looks something like this: 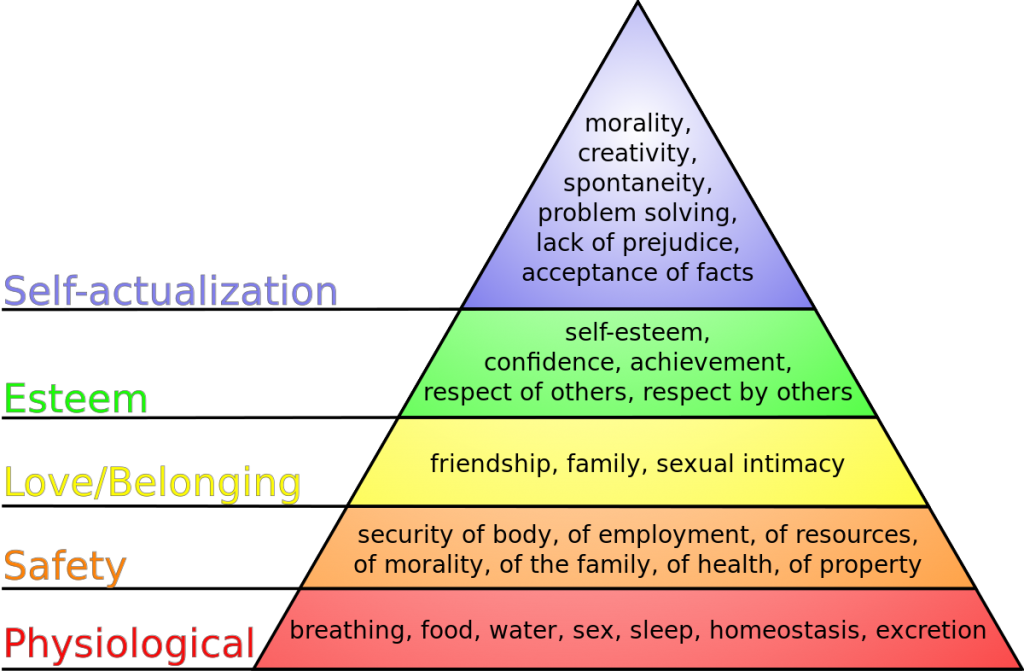 The basic idea is that human beings need to have the things listed in the bottom level of the pyramid before they can start thinking about the things in the levels above.

To some degree this model is true: We all need air, food, water, etc., to stay physically alive. But there’s one critical point Maslow missed…

In 2013, high schooler Logan Beck took his own life — to the utter surprise of everyone who knew him.

“He wasn’t withdrawn, he wasn’t failing, he wasn’t socially awkward,” his stepmother reported. Logan was a good student and part of the junior varsity football team with dreams of going to college and becoming a fighter pilot.

But his family later found Logan’s journal, which “expressed frustration at the ‘mindless sheep’ of society,” and stated that he was “tired of living, tired of the pain in the world.”

Why have so many succumbed to despair and taken their own lives — including, even famous artists and creatives like Kate Spade and Anthony Bourdain?

Because people don’t just need food and shelter to live — they need a purpose.

“Ever more people today have the means to live, but no meaning to live for.”

That’s where YOU come in.

Today’s climate is more confusing and chaotic than ever. So many voices are yelling at us, screaming contradictory messages from the sidelines.

As a writer on a mission with a message, you can literally save lives by rising above the chaos and clearing the path for your readers.

If you know WHY you write, and can communicate that clearly, you can be a guide to others, and they will be drawn to you, like moths to a porch light.

The truth is, people out there need your words.

But the best way to find them is to make your message as crystal clear as you can so that they can hear it above the noise.

And the more you know your WHY, the more you can rise above the cacophony and chaos and resonate with the folks who need to hear your message.

“With the world so set on tearing itself apart, it don’t seem like such a bad thing to me to want to put a little bit of it back together.” — Desmond Doss, Hacksaw Ridge

Let’s face it, the world is messed up.

And our job is to put a little of it back together again, as conscientious objector and Medal of Honor recipient Desmond Doss did, during World War II.

But we can’t change anything by ourselves:

Granted, you may not want to deliver the next “I Have a Dream” speech or “Gettysburg address” just yet.

Use your powers to gather people behind a cause you truly believe in. That will bring you real joy and fulfillment as a writer.

If you are writing in service of a mission bigger than yourself, you will be able to work harder than if you were only doing it for selfish reasons.

Not just that, but you will draw people who want to support you because they believe in your mission.

And when your heart is in the right place, every thought that flows out of your fingers will change your world for the better.

Now, only one question remains…

How do YOU Figure Out Your Deepest, Most Powerful WHY?

In the “Assignments” section of the course (at the end of the module) you will learn three exercises to help you locate and define your deepest, most powerful reason for writing…and for living.

You don’t have to do all of them — rather, read through them and pick the one that will work best for you.

Ready to Move On?

If you are a member of the Inner Circle, click here for your exclusive resources.